In writing about a film like Lang’s one must succumb, for better or worse, to a cliché that has been in existence since shortly after F.W. Murnau released Sunrise, and it became clear that in those celluloid strips containing the look on Janet Gaynor’s face and the way the camera followed her down the frantic streets of the modern capitalist Metropolis and the way the Grimm fairytale countryside gave way to the contemporary, (semi-)sophisticated joyful whirl of the carnival, we had something perfect, totally-and-utterly fulfilled to measure the lost potential of so much of what was to come against.  The cliché is a cliché of mourning; more specifically the mourning for something that had perhaps died the moment of Al Jolson opened his foolish mouth, died in the march of progress (or rather the capitalist myth of the march of progress). Let’s just be specific and risk the ridicule of roughly 80 years’ worth of people raised to see the silent cinema as hopelessly primitive, archaic, chronically simple: in the move to talkies perhaps what was lost was a certain knowledge of the possibilities of the cinema, more specifically the possibilities of the image, it’s transcendent capabilities, its ability to contain all the subconscious, barely recognisable dreams of a population and yet still seem to transmit only the corporeal matter of reality (for when we see a good silent film now we are stunned by its simultaneous method of direct , physical address and ability to seem to exist only in the mind’s eye; all possible worlds seem to be at its disposal). If we are permitted a return to vagueness we shall just say that a certain magic was lost.
There’s an argument to be made that the great directors since 1929 have been those who have most reached in their work this totality of the image that is familiar from the silent cinema. It might be a somewhat reductive argument, and one that perhaps expels some very talented film-makers, but I wouldn’t necessarily get angry at anyone who wanted to make it.

Destiny, like Dreyer’s Vampyr, like Renoir’s Nana, like the serials of Feuillade, like Bunuel and Dali’s Un Chien Andalou, like even the realist-cum-mythic-gothic-Americana of Murnau’s City Girl, is hard to imagine actually being filmed, so obviously does it push at the barriers between our realm and another, so clearly does it feel as if it was dreamt directly onto celluloid. The sets are sometimes obviously artificial and studio-bound, even if beautiful, but that doesn’t lessen the sensation (somehow, quite the opposite) of feeling as if one is witness to an act of creative hypnagogic psychokinesis.
Indeed the film started with a hallucination many years earlier, the young and feverish Friedrich Lang (for he was still Friedrich then) having a vision of Death in his bedroom as a tall, skeletal, monochromatic man with a wide-brimmed hat.  And in Destiny here is that vision again, played by the brilliant Bernhard Goetze (whose face may be the most exquisitely melancholy ever filmed), a tired-eyed, gaunt, physically-wracked and paradoxically haunted Death in long black-robes, who constructs the sort of wall Trump would be proud of to protect the abode he has built on the edge of the graveyard of a European village lost to time. He’s the Weary Death, as the more poetic German title of the film put it, and he wants only to rest, but God is merciless both on him and on the rest of His creation. God marks the groom (Walter Janssen) of a young newlywed couple just arriving in town, and Death carries him off from the tavern where they drink. But the bride (Lili Dagover) follows, and tries to bargain with the reaper; after all, she misread in the Bible that Love is stronger than Death. Death tired and all but wishing for someone to beat him, challenges her; if she can save but one of three analogues of her lover, all of them also about to have their literal candles snuffed out, in  three different historical periods then Death will reunite the newlyweds. But, of course, she fails, mostly due to the violent conniving of jealous patriarchs, and Death ends up trying to strike an even harder bargain.
And so, in between the bookmarks which make up the first, second and sixth verses of this “film in six verses” (as the subtitle has it), we see a tale each from legendary Arabia, Renaissance Venice and the most mystical of Ancient China’s.  The influence of Griffith’s Intolerance is clear, but Lang was a very different man and a very different film-maker. This is a fable only of the bleakest sort, a study in the eventual agonies of both companionship and solitude.  Fate easily turns against one, and the people of the corporeal world offer no assistance or comfort; rather they turn tail and run, aware of the black spot that one now carries, for these deserters focus only on their own self-preservation, the importance of each one of their own living breaths. Escape is impossible, for it is by the almost-random will of an omnipresent power that one finds the bony hand upon their shoulder, and the bony hand belongs to a messenger and servant of the stone-hearted Lord who is almost as omnipresent and overwhelmingly powerful as He (for all of Death’s sullen, sunken regret for his burden).

In the world of Destiny there is no barrier between the everyday and the supernatural; all co-exists and the former regularly meets and lives in fear of a reunion with the latter. The grave, the promise of the grave, encompasses all (is this, then, a sort of precursor to film noir, and particularly the noirs that Lang would make in America?), and any number of ghosts and spirits are willing to rise from their own resting places to remind you of this terrible, desolate fact. 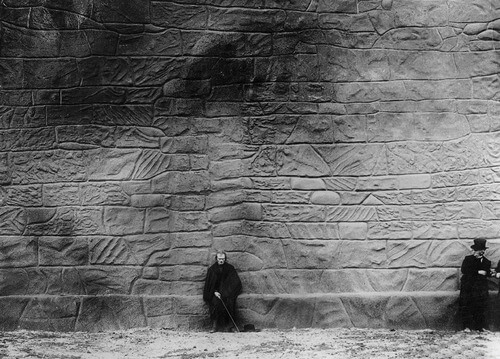 And so it is probably very easy to see how this film is a reaction to World War One and the Spanish Influenza, and while it may seem a harsh, pitiless gift to give to a population still sorrowfully staggering it’s way out of catastrophe (perhaps thus explaining the initial commercial failure of the work), it’s hard not to imagine it being very much a defining statement from the devastated, tormented shadow side of an entire country.  A woman begs again and again for the return of her sweetheart, finds such a thing is impossible, and learns that the matter of our lives is death. No-one on the screen is happy in life in this unhappiest of films; all is negated by the continual recognition of mortality.
And yet, for some, a kind of life and a kind of faith is affirmed by Destiny: the cinematic life, the faith in cinema. The film delights in the showmen’s tricks, the tricks of Melies and his successors, superimpositions, the dust of dreams, the great physical recreation of moments of sublime, supernatural poetry. One can find a sort of solace in the possibilities of image-making in this cursed world, the joy of turning men into ecstatic shadows, conjuring demons from the barest and cheapest of materials, making yours the visions of near-Pagan celebration, the duels and the masks inspired by Commedia dell’arte, the ceremonies and mystical wondering of the legends of Arabia and Asia; so much is possible, if only in the cinema and not necessarily in life itself (as much as this is drawn from life and from history), and Lang will make use of whatever comes his way or arrives in his mind and thus we get elements of Expressionism, Feuilladian surrealism, European folk imagery, the memory of the circus and the penny shows. Make no mistake; as I said earlier this is the material of collective subconscious, unreachable by any other language (all inadequate) but the cinema in the brief moment before television began to demand the reduction of everything to a banality. Every so often, perhaps, we should return to a film like Lang’s so that we can be put in sight again of the beautiful, terrifying shadow of our known universe. Too much of what we watch now begins to resemble being stuck on an infernal, eternal bus journey with only one other passenger, determined to recount the events of his  thoroughly average day to you in excruciating chronological detail; Lang, on the other hand, still has the power to place us in that sweet spot between the known and the unknown, the barely understood and the must-not-be-acknowledged, the familiar and the alluringly forbidden secret, the comforting and all that puts the cold wind through us- the effect is exhilarating and endlessly, tremulously exciting. 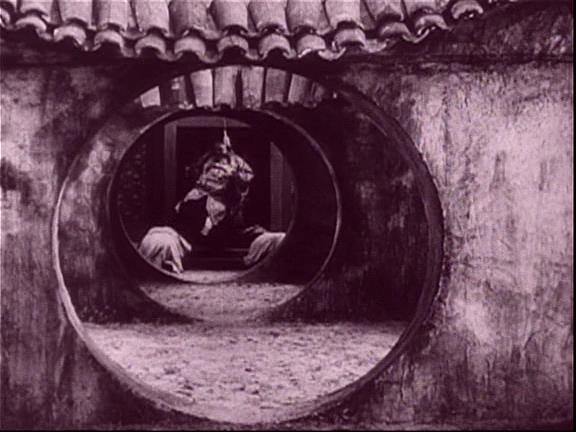