“… and only despair was left at the end.”

Another film, like Pulse (2001, Kurosawa), that is about loneliness. In Retribution Tokyo seems almost as empty as at the end of that film, sparsely populated by the odd human, the ruins of past industrialisation and bulldozed lots where condominiums once stood. In this land, constantly raked over, rebuilt and now forgotten, the most powerful forces still remaining are the traces of past pain and the memories of those who suffered it. It is one of those sufferers who returns from beyond the grave to take revenge on the society that first rejected (shipping her off to a cruelly-run sanatorium where the patients were punished by being suffocated in pails of salt water) and then ignored her as she continued to live amongst the crumbling ruins of her abandoned institutional home. She tells us at the end of the film that she now wishes death upon everyone else, beginning with those who spotted her through the windows of the empty building and did nothing during their daily ferry journey to work years before. Through some unspecified means- possession or constant sanity-threatening suggestion- she leads these people to drown members of their friends and family in pools and puddles of salt water. Those in society who witness and do nothing, those comfortable in their rejection and lack of care for their fellows, are punished; as in Pulse loneliness becomes both a trap and a tool of violence and punishment, and it is the ghosts who turn this tool back on its original wielders. The only difference here is an element of guilt; the corporeal characters are haunted by manifestations of their last shards of conscience and live while trying to escape their tormenting memories (see the case of the traffic cop who has nightmares and visions of the victims he failed to save). Kurosawa’s vision is a powerful one of social culpability and disintegration, the threat of the supernatural a sort of reactionary symptom of a wider disease.
Retribution works best as a sort of addendum to Pulse; the film feels less significant in comparison to that previous work due to both it’s shrinking in scope and a story that, for all the greater meaning it is infused with by Kurosawa, unfolds in a way more in keeping with recent horror traditions and constraints (in terms of J-Horror and Shyamalan third-act twist work, but it also even hints at the likes of The Changeling). Here, unlike before, we sometimes stumble upon the problem of predictability, and the film works best when Kurosawa allows it to stretch towards the overwhelming strangeness of its predecessor, and lets his style comes into full effect. Kurosawa is of course one of contemporary cinema’s greatest stylists, a disciple of the Lewton/Tourneur school of horror film-making, constructing an atmosphere of lurking menace, and a world so off-kilter that the possibility of solid ground upon which to safely situate oneself is almost unthinkable, out of slowness, silence, stillness, shadow and an almost Ozu-ian camera that captures gestures from beginning to end (see, for example, the scene where the old librarian slowly, painstakingly sits down with his back to us, a moment that is almost overwhelmingly suspenseful despite its lack of real action). Even in moments of subjectivity Kurosawa’s camera feels objective, tracking its characters through the void elliptically but essentially, showing us the inches of the movements and moments that are now rich with an almost cosmic significance. As in Tourneur or Robson’s films for Val Lewton (The Seventh Victim in particular) we often find ourselves gazing through windows and doorways precisely because there is an understanding that they now stand as the entranceway to something beyond the corporeal and the human, that to walk through them symbolises the final steps into the unknown.
There are moments of real, sometimes almost-humorous eccentricity here too- ghosts that jump off balconies and float away  on the wind like plastic bags, a water basin that swallows a human being in a moment of consumption akin to something from Jan Svankmajer’s work (not to mention the equally Svankmajerian floating, vacant, sentient clothing). Also, as usual, there is something deeply unsettling about the movement of Kurosawa’s ghosts in their most visible moments, an uneasy combination of gliding ease and disjointed stumbling that transmits a sense of both omnipotence and desperate vulnerability in this spirit’s dimension-crossing, continual pursuit of its victims.
Retribution will most likely never be considered amongst the likes of Pulse, Cure (1997) and Tokyo Sonata (2008) at the top tier of Kurosawa’s films. Those pictures are the greatest, most complete declarations and manifestations of a relentless, idiosyncratic cinematic visionary, but there is enough of that exquisite, piercing vision here to excite the cinephile and make fools of those who despair of the supposed lack of true quality and individuality in contemporary genre and auteur cinema. 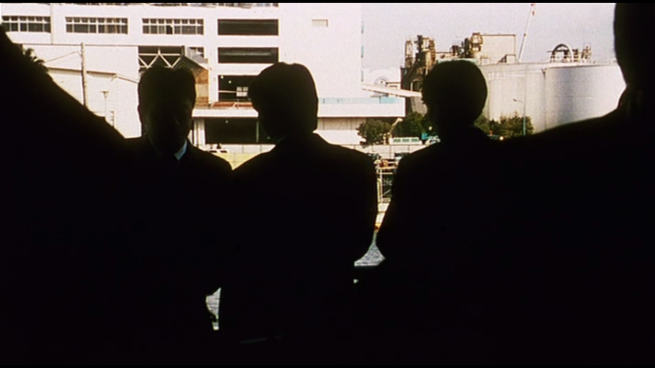